Professor Manson Fok, President of the Sino-Luso International Medical Forum, leans forward to the table of doctors and says, “My father Henry Fok dedicated his life to sports. Unfortunately, he passed away not too long before the 2008 Olympics. But we remember his legacy for sports and sports medicine.” 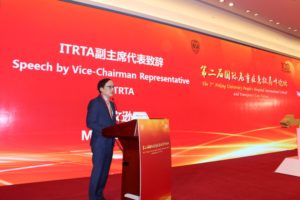 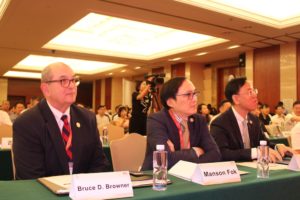 It’s a powerful message to the doctors assembled from the Portuguese-speaking world, notably from Africa, who are about to present high impact science and policy trends in sports medicine.

The de-facto pep talk is part and parcel of the several days of discussions that defined the 7th anniversary of the Sino Luso International Medical Forum held in Beijing and Macao. This Series 43 forum focused on sports and Olympics medicine, the formation of the world’s largest trauma medicine association, and a “people to people” MOU between China and Angola for medical exchanges.

Comments Dr. Billy Chan, Vice President of the Sino-Luso International Medical Forum, “We’ve got our strongest delegation to date from Africa at this forum with doctors and representatives from Angola, Cabo Verde, Mozambique, as well as Portugal, China, and the United States, among many.” 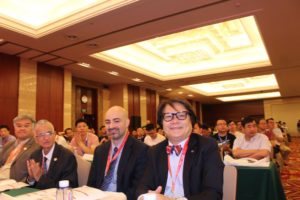 Dr. Chan further says, “Being here in Beijing is special to receive support from Peking University People’s Hospital, the 4-million member strong Chinese Medical Doctors Association, and the National Health Commission (formerly Ministry of Health). They’re making our African and doctors from the Portuguese-speaking world at home, and this is not only a great exchange of science, but of world peace.”

The 43rd Sino-Luso International Medical Forum began Saturday with the formation of a new team to collaborate in global healthcare security: the International Trauma Rescue and Treatment Association (ITRTA). 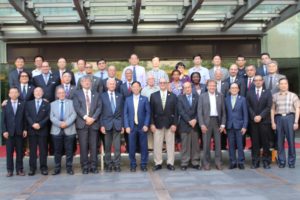 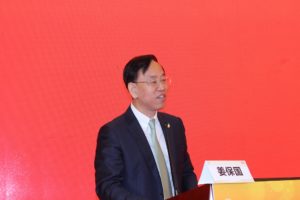 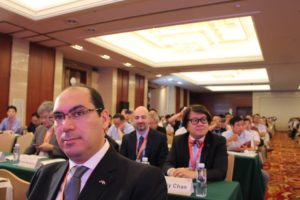 ITRTA will expand upon Dr. Jiang’s internationally acclaimed trauma management system that is currently in operations in over 100 counties in China, coordinating frontline healthcare providers with trauma experts for specific cases with advanced communication.

Professor Fok, Dr. Chan, and Barrister Lobo will be helping ITRTA bridge China via Macao to the Portuguese-speaking world for this endeavor. 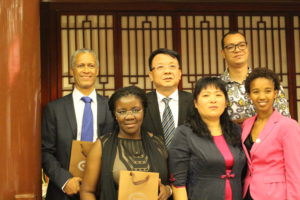 Keeping with this forum’s special African dimension, Saturday night saw both Professor Fok and Dr. Chan inducted into the Angolan Chamber of Commerce for Macao (CCAMO) as Honorary President and Vice President, respectively, for Medical Affairs. 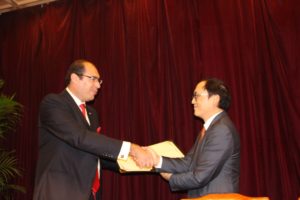 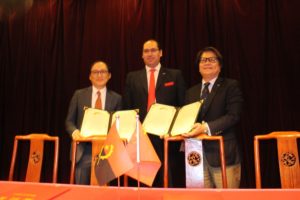 CCAMO President Barrister Lobo also signed an MOU between the Angolan chamber and the Health and Human Resources Department of the National Health Commission of the People’s Republic of China, which was represented for the signing by its Deputy Director General Dr. Zhang Junhua. 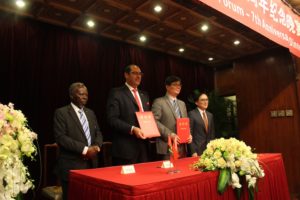 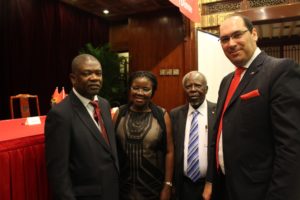 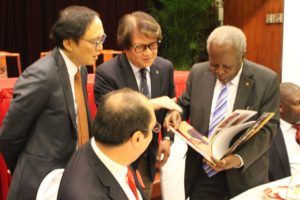 Barrister Lobo said, “I’m so honored to have Professor Fok, Dr. Chan, Minister Chancellor Zulumongo, and Dr. Zhang coming together to bridge Angola and China for medicine. Angola and China can really contribute with medical education and communication—we have needs for malaria and national drug distribution that I’m confident can be enhanced going forward from tonight. And Macao is helping this difference.”

Dr. Zhang also commented about future collaborations between Macao and Chinese doctors should Macao have get a medical school. Dr. Zhang said that, in theory, “We could see great cooperation to bring Chinese doctors to teach there.”

Mr. Virgilio Zulumongo, Minister Chancellor of the Embassy of Angola, witnessed the MOU and expressed hope for future medical cooperation between China and Angola.

Dr. He Zhaohua Deputy Director General, Hong Kong, Macao, Taiwan Office of the National Health Commission, and Dr. Kevin Holland, Minister Counsellor, Director of Life Sciences, and Health and Social Care, of the Embassy of the United Kingdom, and many others from China’s public and private medical sector, also partook in the night’s conversations.

Dr. Holland said, “We recently brought in doctors from King’s College of London to train 400 nurses in Nanjing…We’re very active in China.”

Indeed, Dr. Chan noted the United Kingdom’s impact on medical education training at his Faculty of Health Sciences and the Macau University of Science and Technology where he serves as the Director for the Center for Professional Medical Excellence.

Dr. Chan said, “At my university, we had the Royal College of Surgeons of Edinburg come and certify us. They’re the oldest surgical corporation in the world! Its story begins in the late 1400s when the roles of surgeons required sharp instruments to practice their trade. That they’re collaborating with us in Macao for China is a great step for medical education in Asia.”

At Sunday’s high-profile science symposiums, doctors from the Portuguese-speaking world gave exceptional insight into sports and Olympic medicine—topics near and dear to China from the 2008 Beijing Olympics and the coming 2022 Beijing Olympics.

Dr. Miranda said, “I’m so happy to be here talking China. We don’t have a city this big in my country! The Chinese doctors and people are so friendly.”

Dr. Fabio Costa, head of sports medicine in Mozambique, gave an overview of their medical team and also historical strengths with anti-doping.

Dr. Costa said, “I’d like to come back here to learn more. We need a lot of help with basics in physio-therapy, not just for athletes but for normal people. Without physical therapy recovering from operations or diseases is harder, and it reduces their outcome chances for better recovery.”

Dr. Maria Stella Soares Francisco Cristiano, head of the Olympic Medicine in Angola, highlighted their team and lessons learned—she has served at the 2008 Beijing Olympics, 2012 London Olympics, and 2016 Rio Olympics.

Dr. Cristiano said, “Of all of those games, I must confess, my favorite was the 2006 Luso-fone games held in Macao. People in Macao are so warm and friendly!”

Based in Macao and representing both Portugal and Cabo Verde, Dr. Humberto Evora gave illuminating outlines of common problems and tactics. Dr. Evora served Cabo Verde as a chief medical officer for the 2008 Beijing Olympics, 2012 London Olympics, 2016 Rio, and will be serving at the 2020 Tokyo Olympics.

Dr. Evora said, “I did not have time to mention Mass Casualty Events, but I normally mention the Boston Marathon bombing because sports medicine and trauma medicine in this respect are related.”

This was a telling comment and gave further compliment and contextualization to Dr. Li Tianshi’s discussion of Mass Casualty Events as viewed from the People’s Liberation Army—who coordinate some of the nations’ most noted accidents, such as the August 2015 Tianjin chemical explosion.

More scientific tours and symposiums will be held in Macao in the coming days.

Commented Professor Fok, “After seven years and training over 10,000 frontline healthcare providers in Macao and the region, we can see positive changes, real outcomes.”

First launched in May 2011, the Sino-Luso International Medical Forum is Macao’s leading medical education platform. It is supported by the Chinese Medical Doctors Association, National Health Commission of the People’s Republic of China, many local Macao associations, and has contributed to regional medical diplomacy and scientific advancements. They have signed accords with the University of Lisbon, and have strong relations with the University of Porto, all major surgical associations in Portugal, and the 400,000 member strong Brazilian Medical Association. Prior speakers include former Health Ministers from Angola and Portugal, as well as a Prime Minister from Mozambique, and former Portuguese President Eanes.

Dr. Chan commented, “We’ve been in Macao, Manila, Phnom Penh, Beijing, Chongqing, and even all the way to Porto, Portugal. We are very excited to go to Angola, Brazil, Cabo Verde, Guinea-Bissau, Mozambique, and Sao Tome & Principe, all the Portuguese-speaking countries basically, to learn and share more about medical education.”