High tech medicine and training called for by 2030

High tech medicine and training called for by 2030 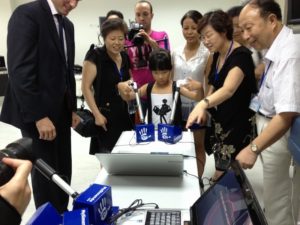 The time for a new era of advanced global medical training is now.

That was the message at the 9th Global Conference on Health Promotion in Shanghai held in late November. Indeed, according to the United Nations Development Agenda for 2030, there must be better healthcare for every person on this planet.

Organized by the World Health Organization (WHO) and the National Health and Family Planning Commission of the People’s Republic of China, it saw more than 1,100 participants, with 40 Ministers of Health and 100 mayors from around the world.

Dr. Bernhard Schwartlander, WHO’s Representative to China, said, “If populations are not healthy, there is no way countries can have prosperous and sustainable futures.”

Dr. Schwartlander continued, “The level of health people enjoy is closely tied to the prospects of urban, national and global sustainable development.”

“The goal of the event is to demonstrate the close links between health and sustainable development, and call for intensified commitment and action to promote and protect people’s physical and mental wellbeing,” according to a WHO statement.

It further lauds good governance, healthy cities and health literacy for health promotion to send a strong message to governments that the promotion of health must be a cornerstone of their national plans for the next 15 years to develop sustainable futures for their societies, says Dr. Schwartlander.

He remarks, “The new 2030 Sustainable Development Agenda can succeed if governments, mayors and other leaders protect, serve and inform their citizens in the many ways needed to help people lead healthy lives.”

The event marked the 30th anniversary of the first such conference, which was held in Canada and delivered the landmark Ottawa Charter for Health Promotion.

Adds Dr. Schwartlander, “A healthier population will provide a more productive, positive and peaceful future, a result that is at the heart of the Sustainable Development Agenda.”